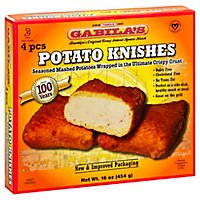 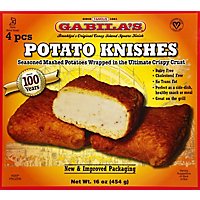 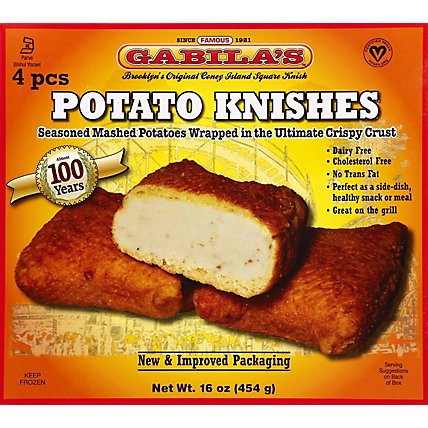 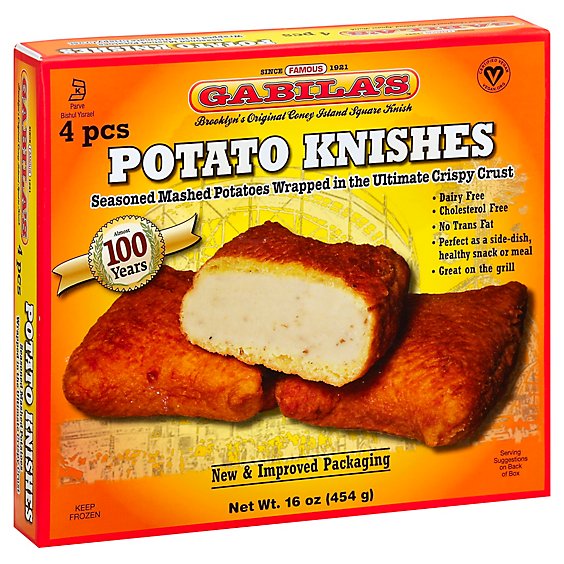 Seasoned mashed potatoes wrapped in the ultimate crispy crust. Brooklyn's original Coney Island square knish. Certified vegan. vegan.org. Dairy free. Cholesterol free. No trans fat. Perfect as a side-dish, healthy snack or meal. Great on the grill. Almost 100 years. New & improved packaging. Famous since 1921. Gabila's has a proud tradition, with its roots embedded in the streets of New York City. The knish (mashed potatoes wrapped in dough then baked or fried) was eaten as a snack, appetizer or side dish. It became famous in the early 1900's. Gabila's Knishes began in 1921, when Elia and Bella Gabay created Brooklyn's original Coney Island square knish. Using Bella's original recipe, they created a lightly seasoned mashed potato pie wrapped in the ultimate crispy crust. Gabila's Knishes started in the Gabay kitchen in the lower east side of New York City. Bella did the cooking while her husband, Elia, sold their delicious knishes on a push cart. Before they knew it, all the delis across New York City were asking for the gabila knish. In 1928, the Gabays moved their operation to a larger facility in the Williamsburg section of Brooklyn, New York. In no time, the gabila knish became a staple item on every push cart in New York City. As business grew, the Gabays invented a veritable production miracle, an automated knish machine. This invention was critical to meet the overwhelming demands of their customers. Today, this fourth generation, family owned and operated business, is still the king of potato pies producing over fifteen-million knishes per year with pride and tradition. Still using Bella's original recipe, each Gabila Knish has its own unique look. In 2006, Gabila relocated its factory from Brooklyn, New York to a new, state-of-the art facility, on the south shore of Long Island, New York. Over the years Gabila's added gourmet knishes to their line in various flavors and sizes. Recently, Gabila's further expanded its product line, adding additional gourmet items such as handmade cheese blintzes and delicious pancakes. Both items are available in various flavors. Gabila also offers pickles, peppers and low-fat souffles in many varieties. Gabila's famous holiday favorites include sweet noodle, apple, and potato pudding, as well as egg barley mushroom, kasha varnishka, and matzoh balls. Once only available on the streets of New York City, Gabila's Food Products, with over 100 items to choose from, are now available for all to enjoy. Gabila's line of line products is available in major supermarkets, warehouse clubs, stadiums and delis throughout the nation. For more information about Gabila's products call 631-789-2220 or visit our website at www.gabilas.com.

Keep frozen. Heating Instructions: Go from freezer to oven - Do not defrost. For best results, heat in oven. Before heating, unwrap and remove knishes from tray. (Oven): Preheat oven to 375 degrees F. Place knishes directly on oven rack or on a baking sheet/tin foil and heat for 30-40 minutes or until desired temperature. (Microwave): Place knishes on a microwaveable safe dish. Heat on high for 2-4 minutes or until desired temperature. Note: For a crispy crust, after heating in microwave, place knishes in oven and bake at 375 degrees F for 1-2 minutes or until desired crispiness. Serving Suggestions: Enjoy with your favorite condiment like spicy brown mustard, pizza sauce, ketchup, gravy or salsa. Create your own sandwiches by slicing open and filling with your favorite vegetables, hot dogs, cheese, sour cream or hot deli meats like pastrami, corned beef, roast beef or turkey. Keep frozen and use by expiration date.