Make it extra-festive with a holiday ham.

It's the Roast Wonderful

How to cook ham: what’s the best way?

There are three main ways you can cook ham: in the oven, in a slow cooker or in water.

1. Oven-Roasted Ham: Oven-roasted ham is cooked in a roasting pan with water and covered with foil or brown paper. The meat is basted occasionally during cooking, which keeps it moist while sealing in the flavor. This method produces the best flavor with a crispy brown exterior and tender interior.

2. Slow Cooker Ham: If you want an easy method to give you moist and flavorful ham, slow cooking is the way to go. This method is especially great for smaller gatherings. A four to five-pound ham can cook on low for about 3-4 hours. The process of slow cooking allows the meat to absorb all that delicious flavor from the seasonings and liquid without drying it out. This method also makes it easier for your guests to carve their own slices of ham, as there are no bones to contend with. This can be especially helpful if you have some new meat carvers at your table!

3. Boiled Ham: Boiling your ham was once the most common way to prepare it at home because it's easy and requires little effort or attention while cooking. However, today many people prefer roasting instead because they believe that boiled hams taste less flavorful than roasted ones do — they're also easier to overcook in the oven if you're not paying close attention.

Cooking times vary, depending on the weight of your pork, your elevation, your oven and more. Always read the instructions on your ham and make sure your meat reaches an internal temperature of 145° F before serving.

How to store ham: are there any foolproof methods?

The key to keeping ham fresh is low temperatures and humidity, so it’s best to store your ham in the fridge or freezer or a cool, dark place. If your ham has been frozen, thaw it before cooking.

Can you tell me how to glaze a ham?

Glazing is what gives the ham its deep brown color and glossy sheen. Glazing helps seal in moisture so the meat stays juicy and tender, plus it enhances flavor by caramelizing around the edges of the meat. Glazing also seals in juices from any sauce you might use.

If you're using a store-bought glaze, make sure you follow the directions on the package. It's important that you don't overdo it. Just brush the glaze onto the ham and let it soak in. If there are any spots that aren't fully covered with glaze, just brush them again.

What’s the best way to use leftover ham?

If you have leftover ham, then lucky you! Wondering what to do? Here are ten easy, delicious ideas.

How long will my ham last?

When stored in the refrigerator, a fully cooked ham may be kept for up to 7 days after being removed from its packaging. A fresh, uncooked ham should be refrigerated and used within 2 days after purchase.*

Our goal: to have the highest standards in the industry. So, how do our dedicated and passionate seafood professionals ensure every salmon, scallop, and halibut steak showcase freshness and quality you can taste?

1. We develop and maintain specifications that meet industry standards.
2. Our seafood is caught and handled to meet our quality, temperature, and receiving standards.
3. We partner directly with trusted suppliers and support local fisheries in many areas.
4. Our sourcing practices include traceability requirements to ensure that the seafood has maintained proper handling and supply chain transparency.
5. Our fresh seafood arrives at our stores within 1-2 days from local partners and facilities and is delivered with freshness in mind.
6. Our fresh seafoods are expertly handled in our stores by dedicated, trained professionals.
7. We follow strict fresh fish code dating and replenishment guidelines, to help ensure your seafood exceeds your expectations.

You can trust that the seafood we provide is handled and packaged to our highest expectations and standards for quality. 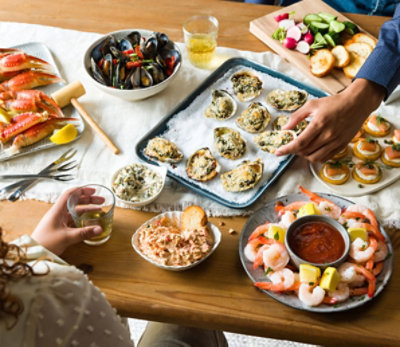